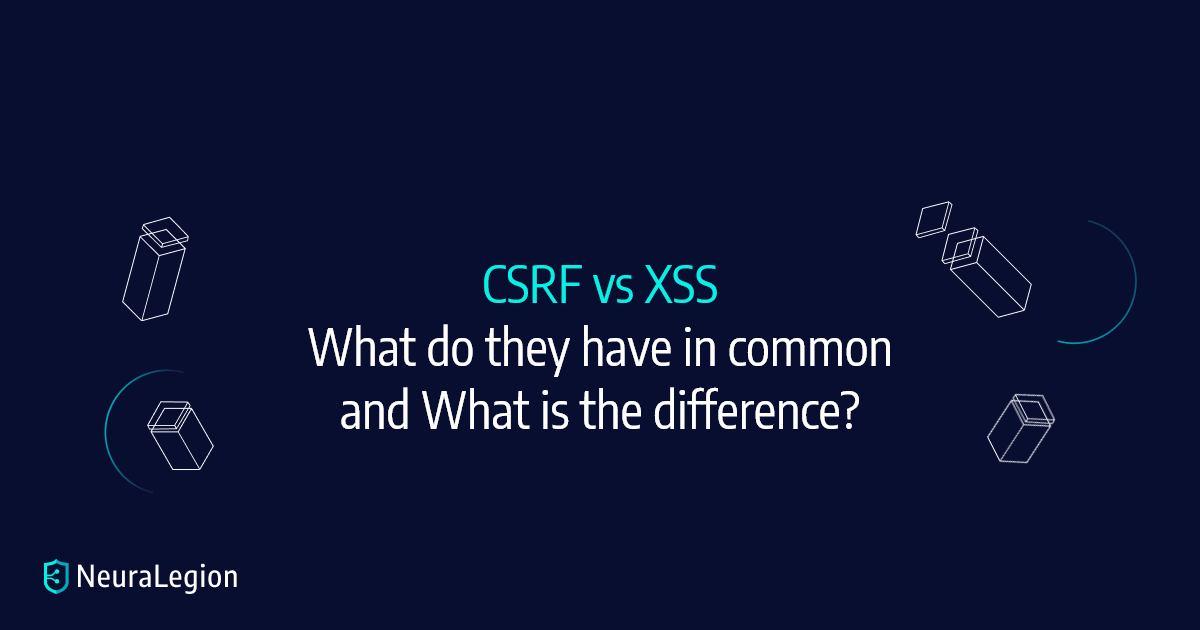 Both CSRF and XSS are client side attacks. What else do they have in common and what is the difference between them? Learn the answer to those and more questions by reading this article. We are going to cover:

What is the difference between CSRF and XSS?

Cross site request forgery (CSRF) is a web application security attack that tricks a web browser into executing an unwanted action in an application to which a user is already logged in. The attack is also known as XSRF, Sea Surf or Session Riding.

A successful CSRF attack can result in damaged client relationships, unauthorized fund transfers, changed passwords and data theft. This attack can be devastating for both the business and the client.

CSRF vulnerabilities have been found in many applications including some big names like McAfee and INGDirect.

How does CSRF work?

To conduct a successful CSRF attack, the attacker will typically use social engineering, such as an email or link that will trick a victim into sending a forger request to a server. As the user is already authenticated by their application at the time the attack is happening, it’s impossible for the application to differentiate a legitimate request from a forged one.

For a CSRF attack to be possible and successful, these three key conditions must be in place:

Assume you authenticate to your bank’s website, and without logging out, you visit an evil website. The evil website contains a HTML page that has the following form:

You like winning money, so the next thing you do is clicking the submit button. Unintentionally, you transfer $100 to a malicious user in the process. Why does this happen? While the evil website can’t see your cookies, those cookies associated with your bank are being sent along with the request.

Cross-site scripting or XSS is a web security vulnerability that lets an attacker compromise the interactions users have with a vulnerable application. The attacker is allowed to avoid the same origin policy designed to segregate different websites.

XSS vulnerabilities usually allow the attacker to disguise as a victim user, to perform any action the user is able to perform, and to access any of the user’s data. The attacker might be able to get complete control over all of the application’s data and functionality if the victim user has privileged access within the application. XSS attacks’ victims include some big names like eBay, Twitter and Yahoo.

How does XSS work?

The following snippet of server-side pseudo code is used to display the most recent comment on a web page:

The script above takes the latest comment from a database and inserts it into an HTML page. It assumes that the comment consists of only text, without any HTML tags or other code. What makes it vulnerable to XSS is allowing the attacker to submit a malicious payload within a comment, like:

The web server provides the following HTML code to users that visit this web page:

The malicious script executes once the page is loaded in the victim’s browser. Most often, the victim is unable to prevent such an attack because it is hard to even realize the attack is happening.

How is CSRF different from XSS?

The key difference between those two attacks is that a CSRF attack requires an authenticated session, while XSS attacks don’t. Some other differences are:

Some XSS attacks can be prevented through effective use of CSRF tokens. Consider a simple reflected XSS vulnerability that can be trivially exploited like this:

Now, suppose that the vulnerable function includes a CSRF token:

If the server properly validates the token, and rejects requests without a valid CSRF token, the token will prevent exploitation of the XSS vulnerability. The reflected form of XSS involves a cross-site request. By preventing the malicious user from forging a cross-site request, the application prevents trivial exploitation of the XSS vulnerability.

Can we bypass CSRF protection with an XSS attack?

Using XSS we can bypass the CSRF protection and we can automate any action that anybody can do on the application without problems.

The attacker would place this code on a website, and then trick a victim into visiting it. Because of CSRF protection, this would not work. The result would be:

Now it’s easy for the attacker to bypass CSRF protection via XSS. He would first get the valid token from the form, build the attack from with the retrieved token, and then submit the form:

The malicious JavaScript doesn’t have to be hosted on the victim server.

The result in our debug file would be:

The value evilUser, controlled by the attacker, would be submitted by the victim.

In an actual attack, the victim wouldn’t be aware of any of this happening, as the attacker can load and execute the malicious JavaScript in an iframe and possibly redirect the victim to an innocent page.

Preventing CSRF and XSS with NeuraLegion

Having CSRF protection in place doesn’t limit the potential of XSS vulnerabilities. This increases the importance of proper XSS protection.

With NeuraLegion’s NexPloit you can test for both CSRF and XSS, besides of other OWASP Top 10 vulnerabilities and more. NexPloit is from ground up built with developers in mind, and integrates with the tools developers already use and love.

NexPloit reports only those findings that the engine validates can be exploited, reducing the alert fatigue to zero. The reported findings come with clear remediation guidelines for the team, to fix the security vulnerabilities before they hit production.

Want to see NexPloit in action? Get a free account here – https://nexploit.app/signup

Want to learn more about CSRF or XSS?

Have a look at these articles: